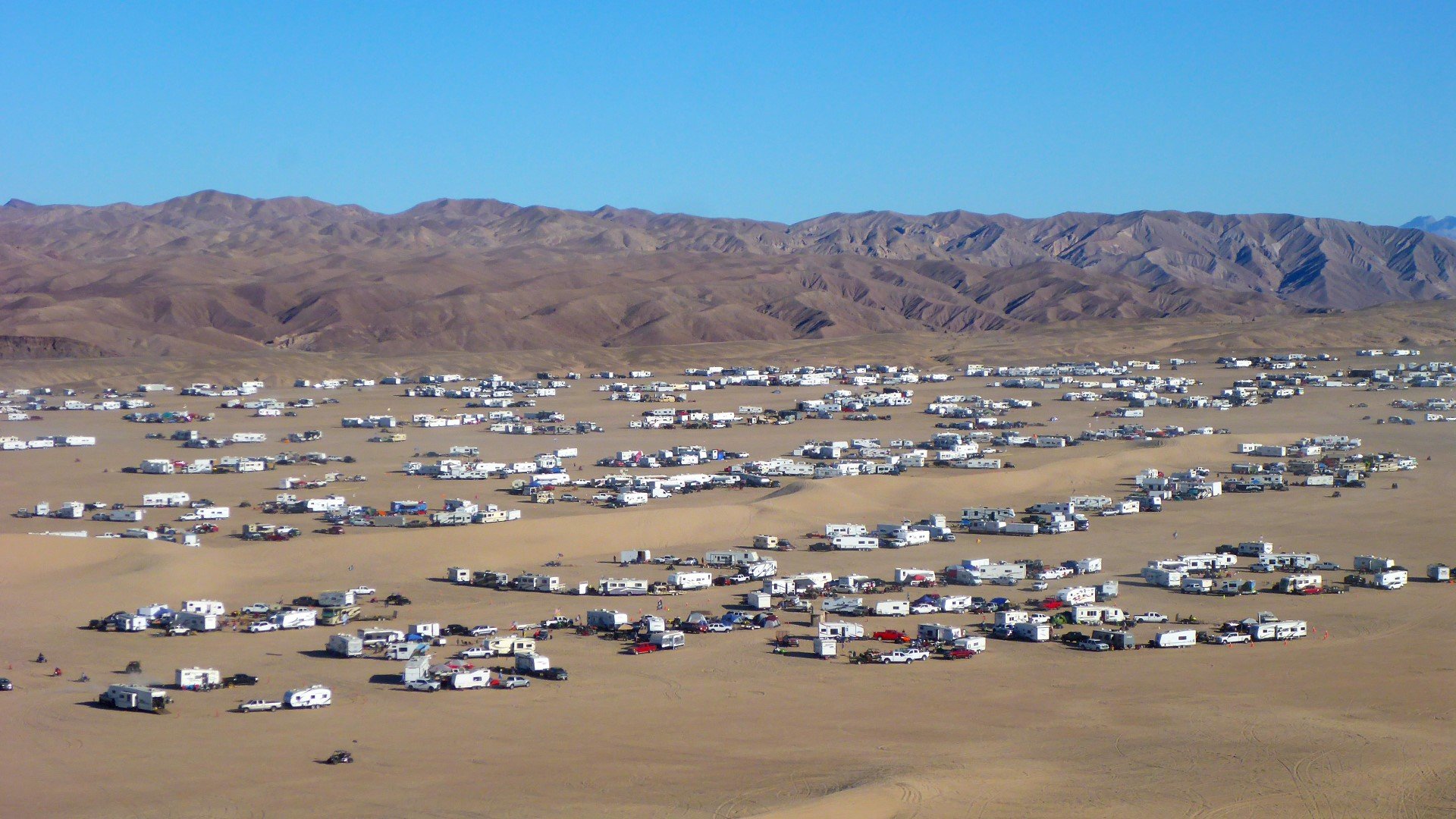 Dune season started off strong this year with Halloween weekend drawing a crowd of over 16,000 duners at Dumont Dunes. The camp area looked very similar to how it did back in 2008 before the economy tanked. The normally empty camp area was transformed into a small city for a few days as visitors snatched up their own piece of sandy real estate for the weekend.

Temperatures were warm the whole weekend with highs around 90 degrees during the middle of the day. Everyone was searching for the ice cream trucks. Between the high amount of traffic and the lack of rain at Dumont, the dust level was much higher than normal. Without hardly any wind, there was a thick cloud that lingered each day, mostly noticed around sun-down.

This year a new tradition was introduced, the Trunk or Treat at the Rock Pile. As a join effort between the Friends of Dumont Dunes and the Basrtow BLM, their main focus was to create a safe and exciting trick-or-treat experience for the kids (and adults).  Jason Ardenski, president of FoDD, awarded five commemorative plaques to those who went above and beyond with the best decorations, best candy, and best costumes.

The winner of the "Best Kids Costume" went to this little Frappuccino as voted by the crowd! 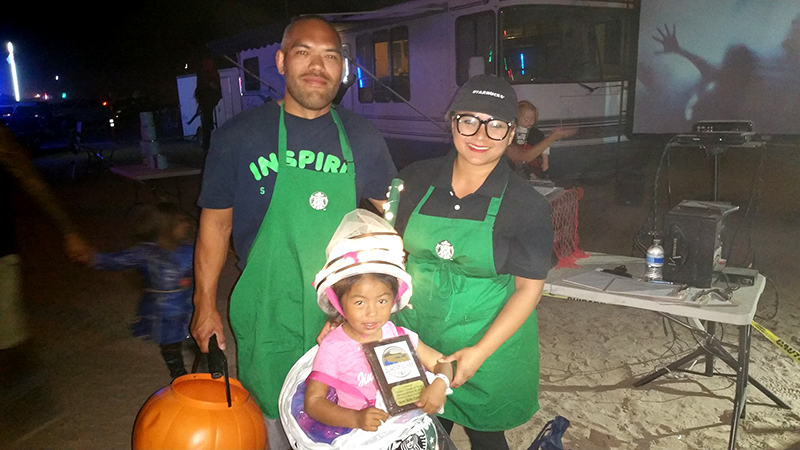 The winner of the "Best Decorated UTV" went to the builders/owners of the Land Speeder!

They also brought out the Hampster Kia UTV and the Flintstone- mobile! 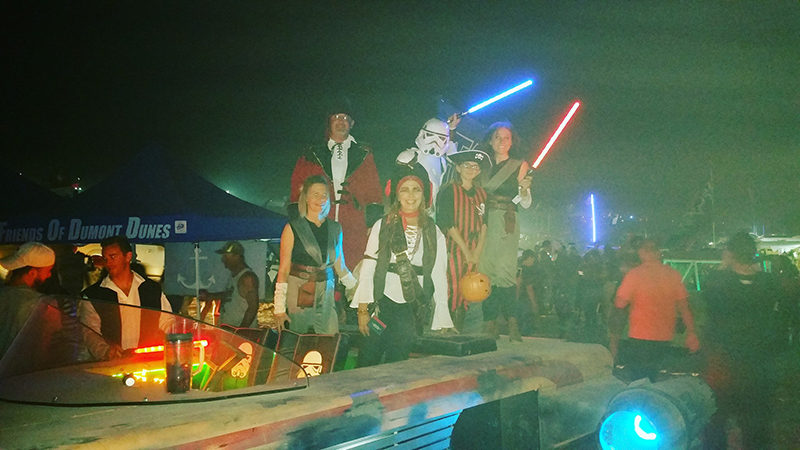 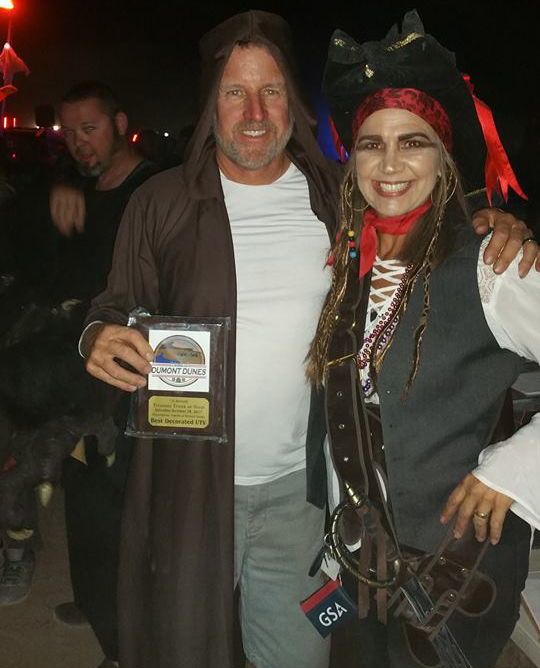 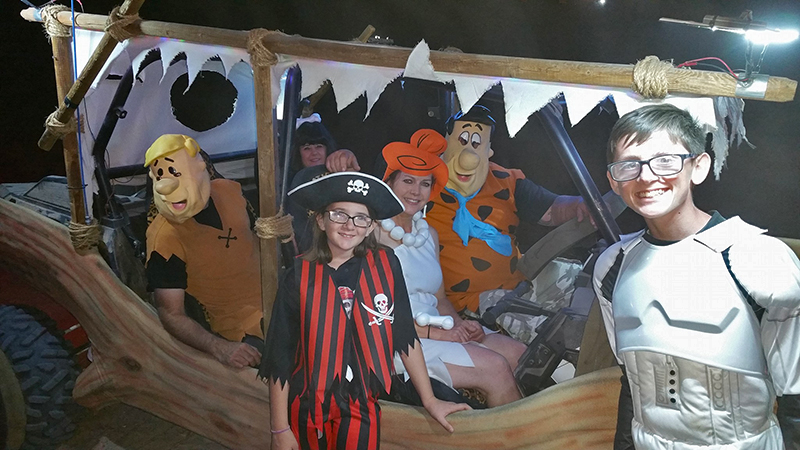 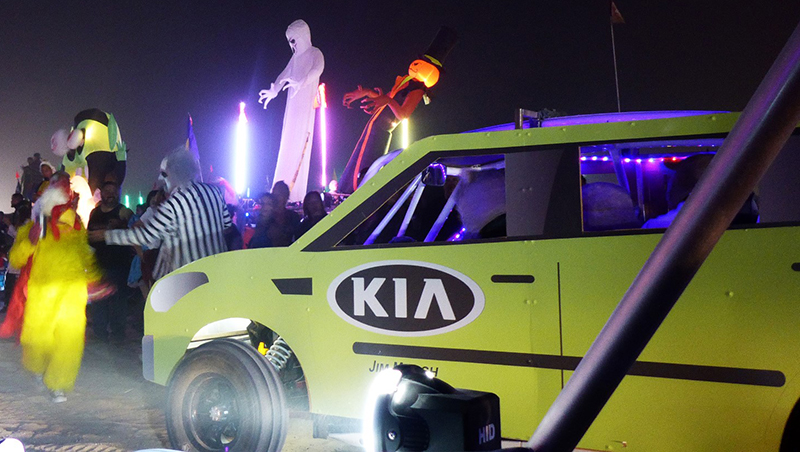 Unfortunately not one single sandcar was decorated during the event so...the winner of the "Best Decorated Sandcar" went to this entire group! This group showed up with a 40' gooseneck trailer decorated to the max and passed out candy from about every 5 feet of it from different people! 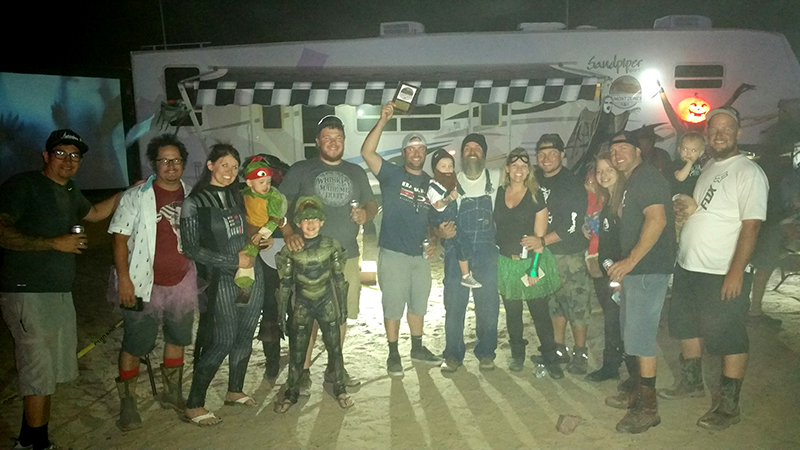 The winner of the "Best Adult Costume" went to this alien guy as voted by the crowd! 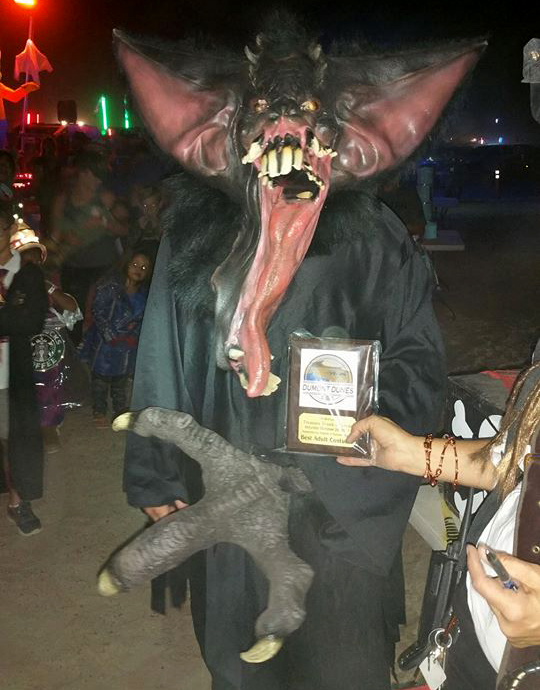 The couple that was chosen for the winner of the "Best Candy" at the Truck or Treat disappeared before they could even announce them as the winner!

The overall turnout and reaction from the 1st Annual Trunk or Treat was awesome! Over 4800 people participated in the event and everyone loved it. There was only one or two negative comments, which is to be expected at a 1st annual event. The complaints were about parking and also it taking away from the general tradition of camp to camp trick or treating. Many duners managed to do both though. After the Truck or Treat was over, families still had a chance to go camp hopping. New traditions after many years of everyone doing the same thing can be difficult to achieve, but these guys seemed to pull it off great and it seems like it will be an annual thing from now on at Dumont on Halloween weekend. 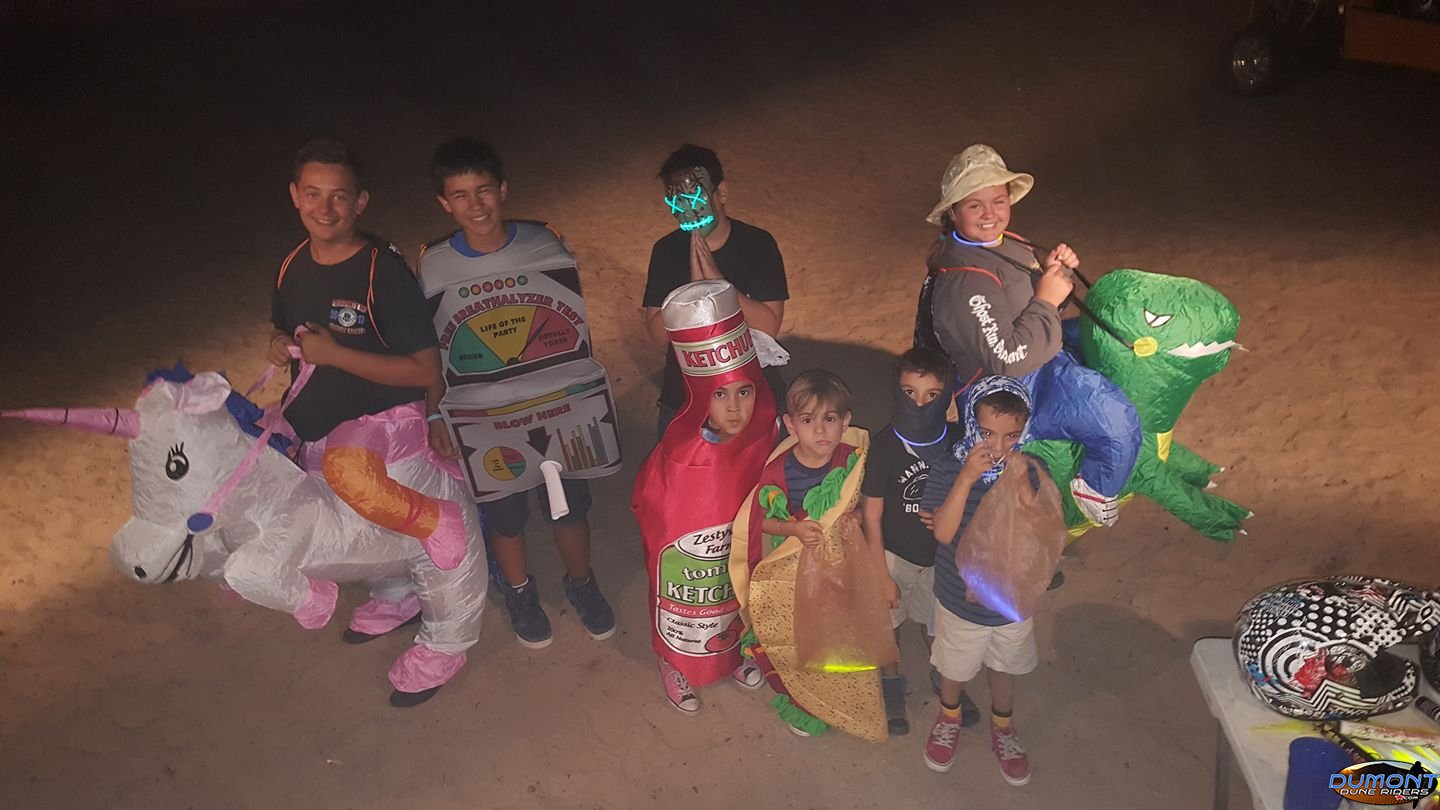 Speaking of Halloween traditions and costumes...the Romo Motorsports crew put together another great group costume idea this year. You might remember them dressed as the dinosaurs last year. This time their entire camp was a group of lit up Dumont stick men.

Halloween is probably the most festive weekend at Dumont and also one of the biggest parties at Comp Hill. Many agreed they had never seen so many people over there. The place was packed with rows and rows LED-lit vehicles and people partying it up! 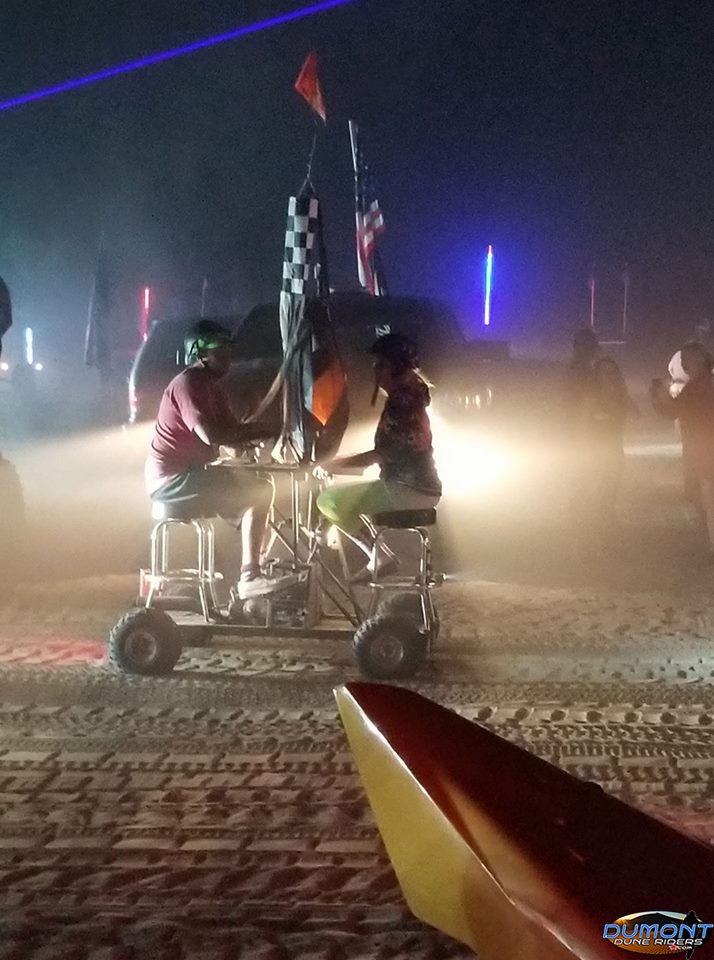 With all this much excitement, accidents are unfortunately bound to happen. There were only 2 medivac calls and 16 incidents the whole weekend. Most duners were being very careful this year and there were zero fatalities. This sandcar had an accident at the top of Comp Hill and rolled 11+ times down the hill. Luckily both the driver and passenger were ok. 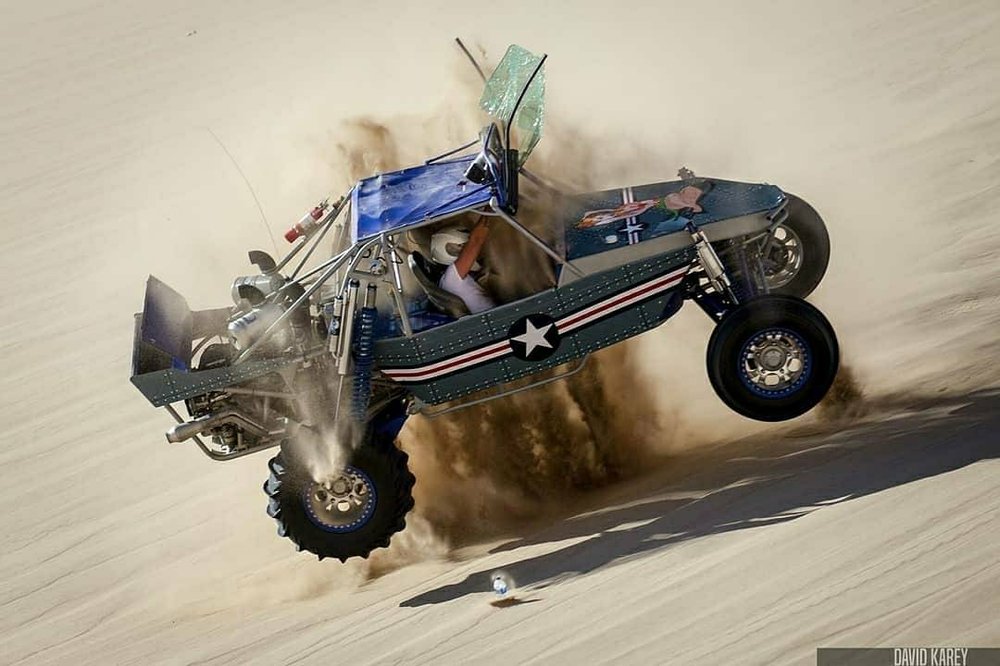 Dirtbikes seem to really be taking off these days at Dumont, figuratively and literally. The two wheeler trend is strong and they were seen wherever there was a good jump. Riders nowadays seem to be getting better and better as well as more responsible. Every group that was jumping had several spotters to play it safe.

Although the crowds were big, Vendor Row was much smaller this year. Despite the economy doing well, vendors are suffering at Dumont. Strict permit requirements and the lack of business at the dunes has forced many vendors to hang it up for good. Hopefully something changes because vendors make our lives much easier on the big weekends, not to mention more fun. 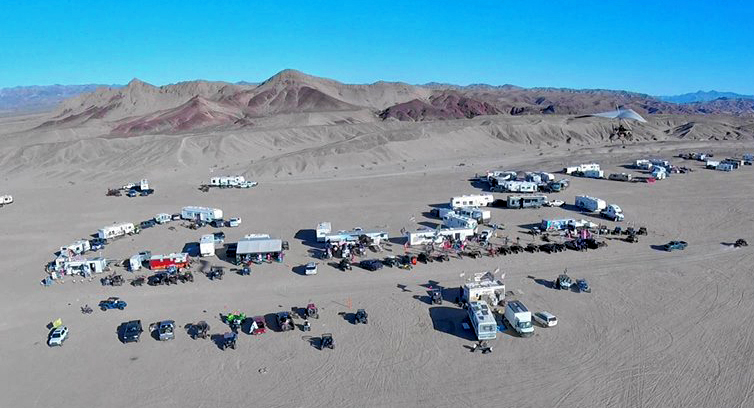 In addition to the partying, trick-or-treating, fireworks, costumes, and more, Halloween Weekend still revolves around the main reason we go to Dumont, DUNING! The dunes were fairly smooth up until late Friday. After that they became extremely tracked out and busy. The North Pole was a popular destination and hangout as usual during the day. 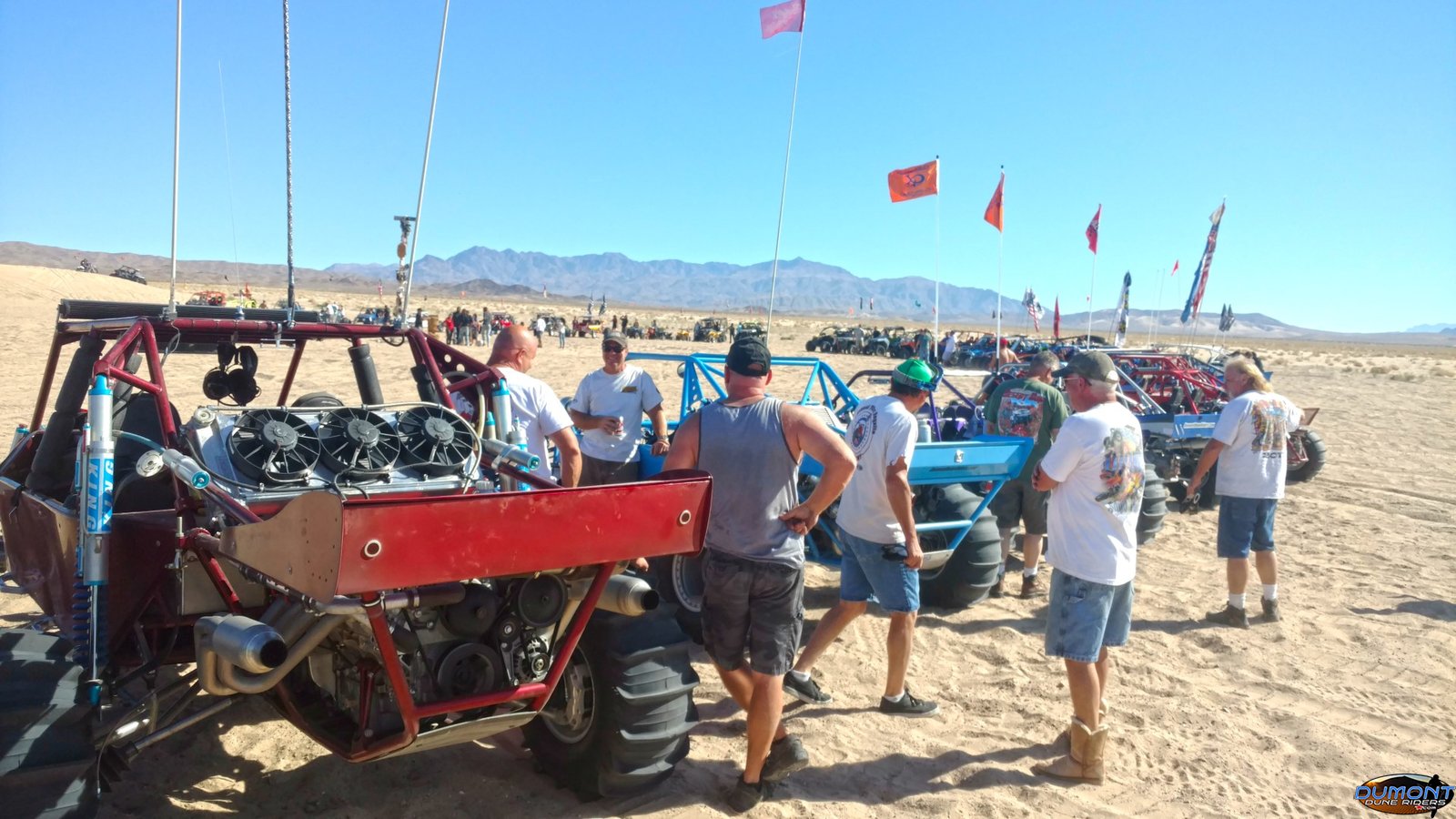 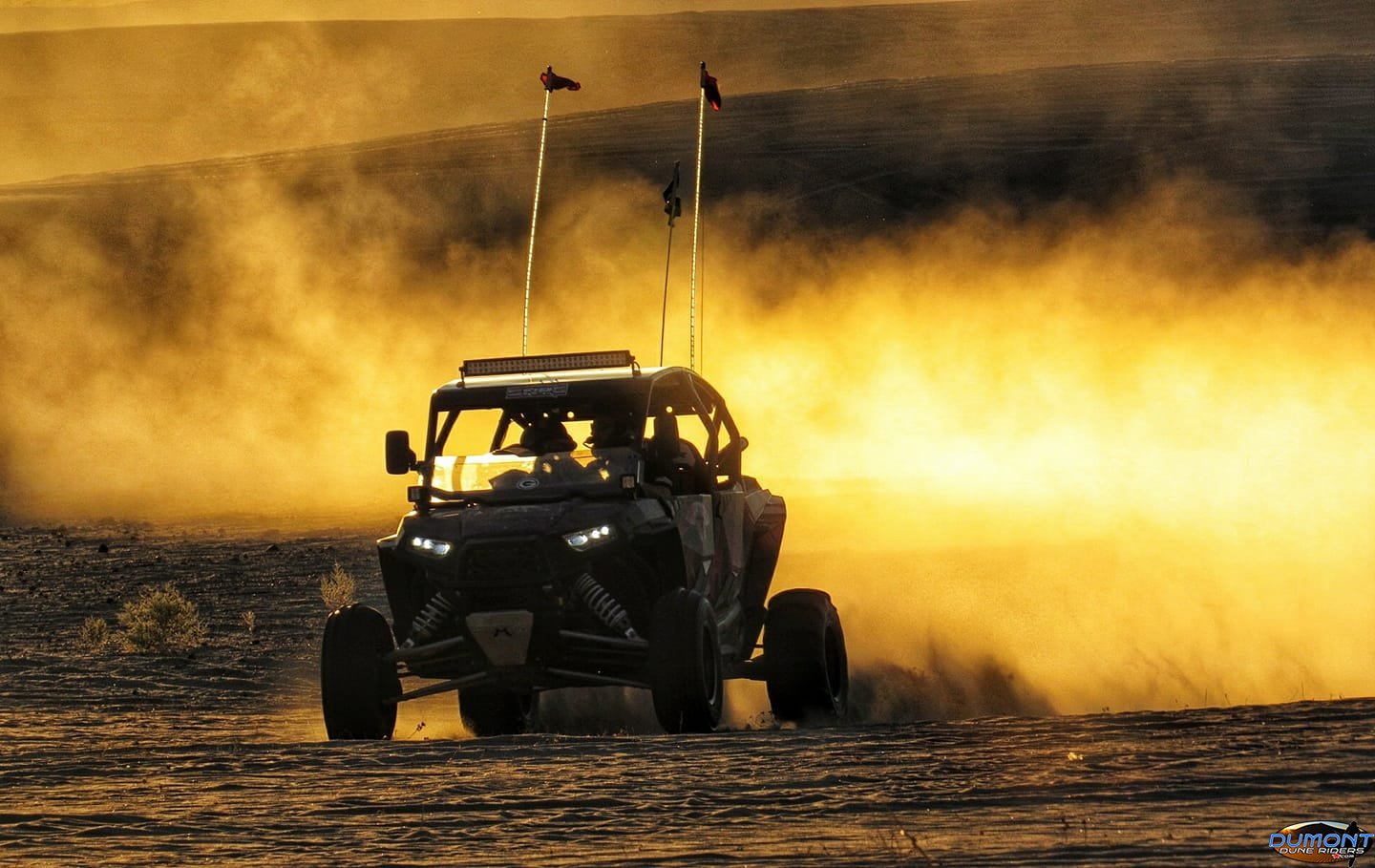 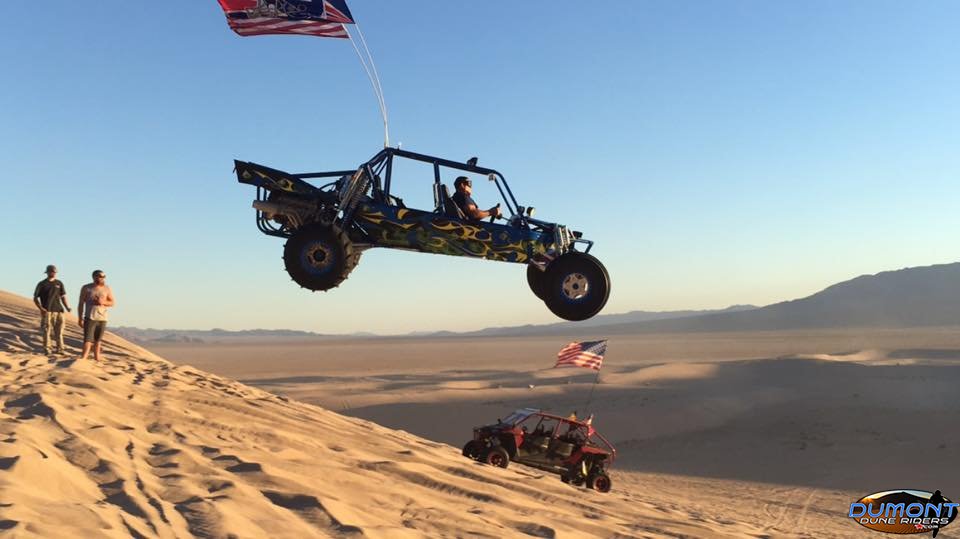 Not only was there tons of action in the sand but up above these guys were having a blast as well. Pilots, Bill Bâby and Ryan Thomas, managed to get a bird's eye view of the dunes. They had the best seats in the house from up there as they buzzed the dunes and camp area! The early and late parts of the season offer warm enough weather for these guys to fly here. 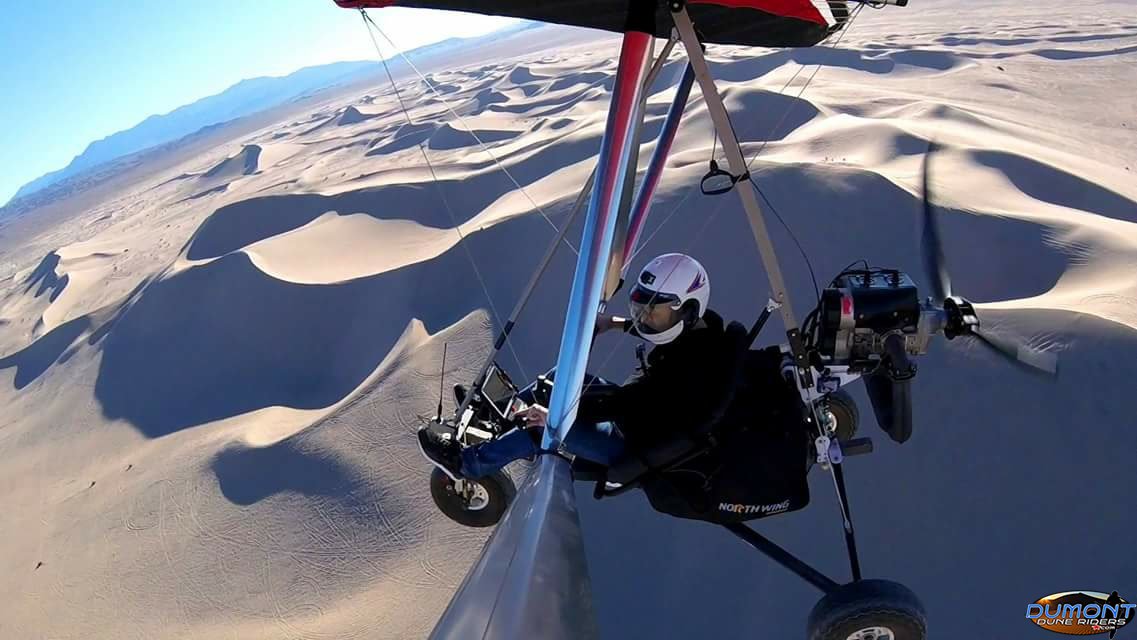 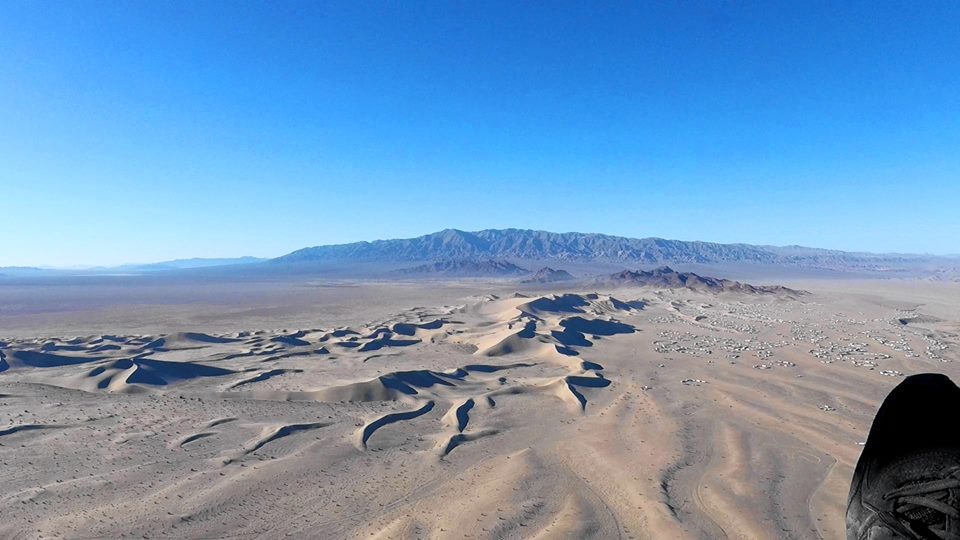 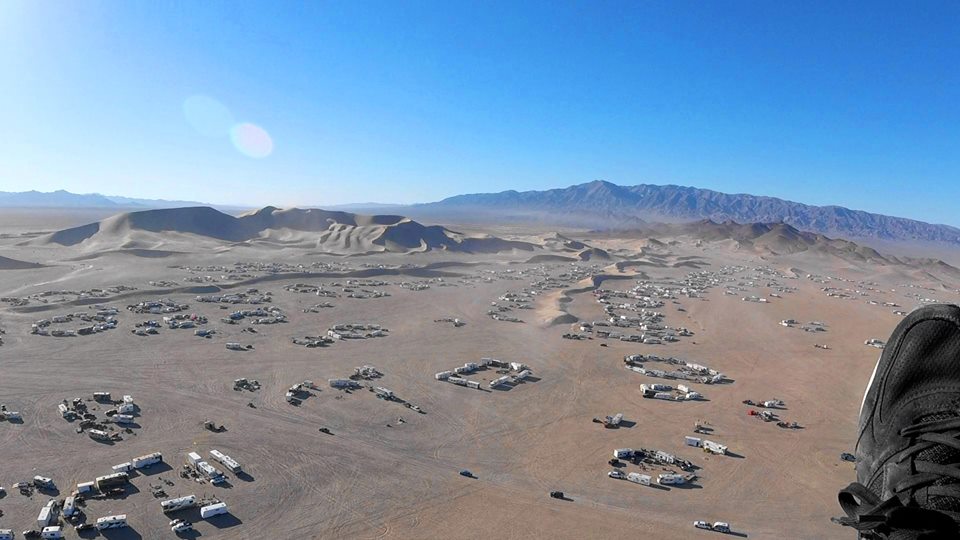 It was quite a fun and exciting weekend at the dunes.

Next up is Thanksgiving Weekend so get ready!