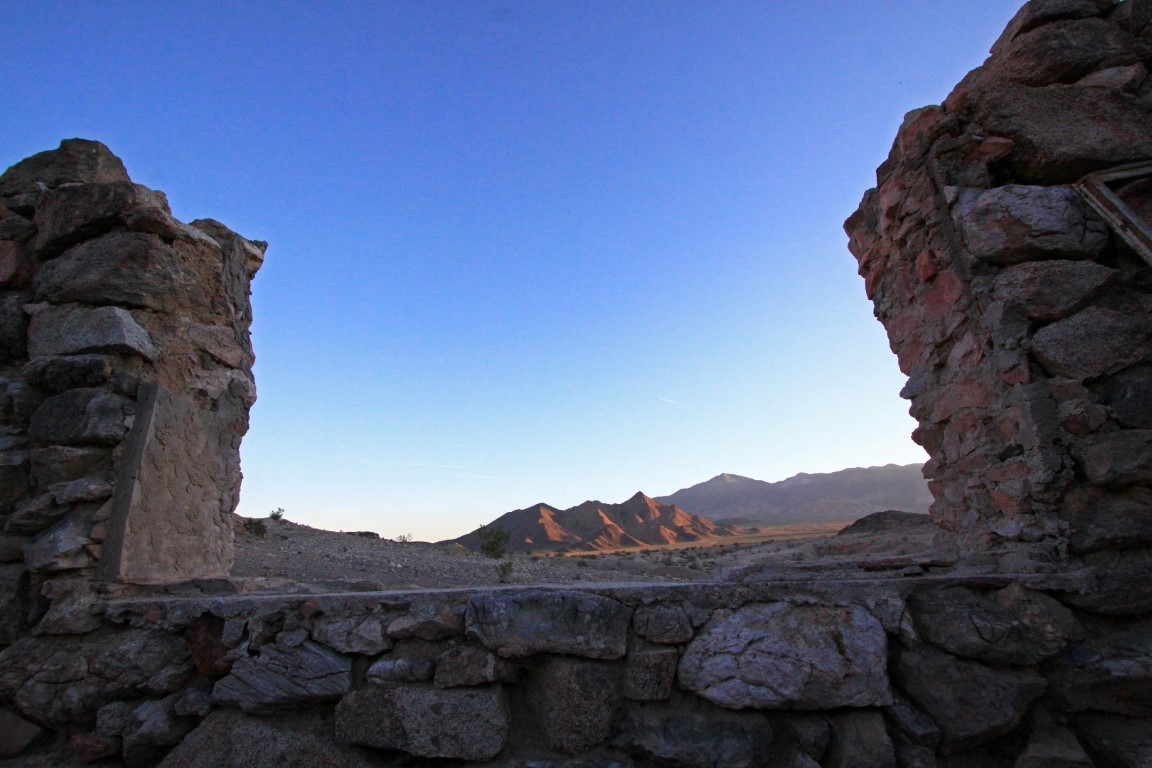 Feel like taking a little adventure during your trip to Dumont? Take a cruise over to the mines near Little Dumont and discover a piece of gold mining history that dates back to the 1800's!

The Salt Creek Mining District is just minutes from the camp area at the big dunes. Old stamp mills, mines and ruins still remain from a mining operation that lasted from 1849 to 1920. In 1849, Jefferson Hunt led seven Mormon wagons along the Old Spanish Trail and camped at Salt Creek. Hunt's party discovered gold nuggets in the wash and in quartz ledges along the canyon. In it's heyday, miners produced a large amount of gold from small, rich pockets; however due the isolated nature of the site, the poor quality of water, a lack of readily available wood, and predatory Indians, mining in this area came to a halt. 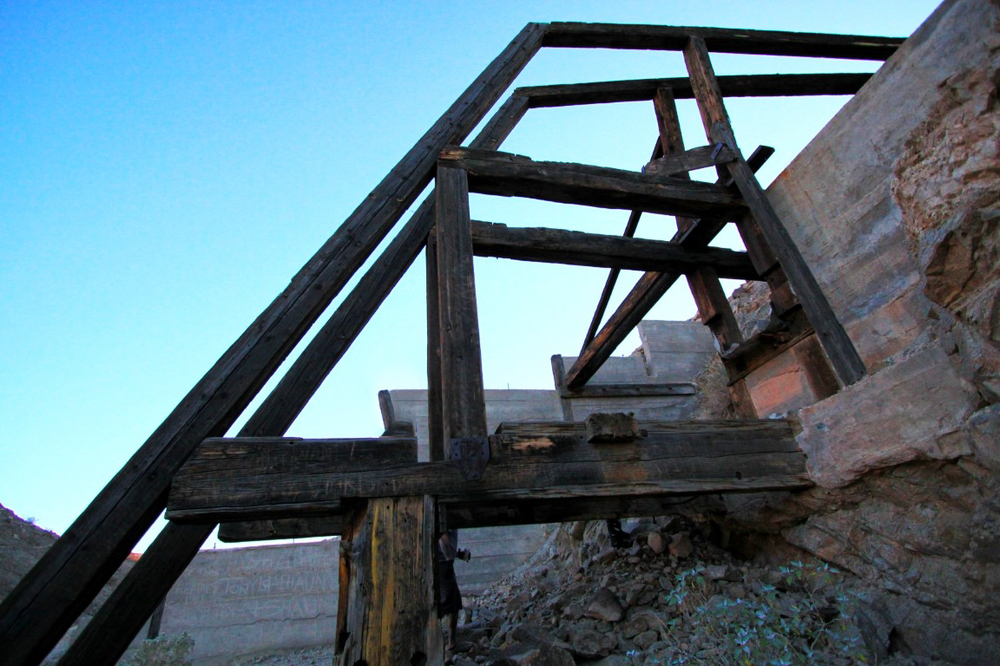 There have been two reports of massacres that occurred here.
1. In the mid 1860's, there was an attack on miners by Paiute Indians. The tribe was camped nearby at Sheep Creek Springs. Eight miners, who were working here spotted the Indians. One of the miners traveled 45 miles to Camp Marl Springs to seek military assistance. The army sent a relief party for the miners. The seven remaining miners were unaware that help was on the way. One early morning they attempted to escape the area and scattered through the desert. The help from the military was unable to arrive in time. The miners were spotted by the Paiute Indians and all seven were killed.
2. Back in 1864, three miners were attacked by a wandering pack of Chemehuevi Indians. Their mill and houses were burned to the ground and one miner was killed. The two remaining miners escaped to the desert, but committed suicide about 20 miles away. 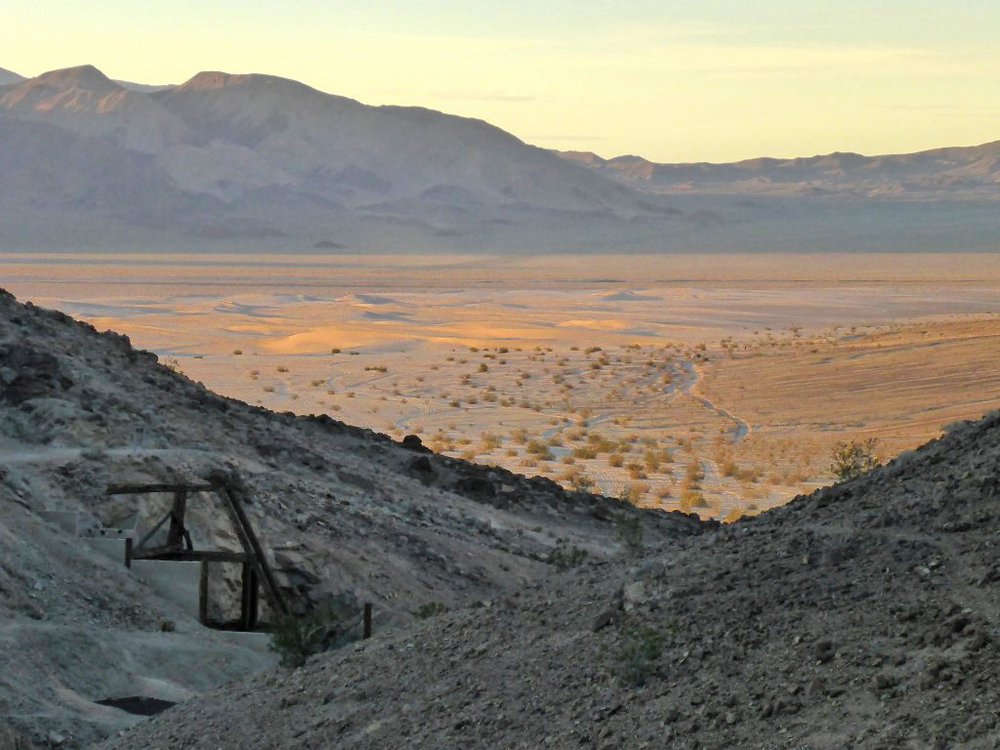 Take a short ride from the southwest area of the main camp area at Dumont. You'll see the cable and post border as you get close to the mountains. There is a sandy trail that follows the base of the mountains over to Little Dumont. It gets a little rocky in some areas, but you don't need dirt tires. Your paddles will do just fine as long as you take it easy on the throttle. There are a couple different trails that run next to each other, but they all end up at Little Dumont. Just follow the trails and tracks. Once you get to Little Dumont, continue a little farther south past the dunes. The Salt Creek Mines are located in a canyon not far from there. Just follow the trail and look for the trail head signage. The mines are nestled in the hills just south of the Little Dunes. 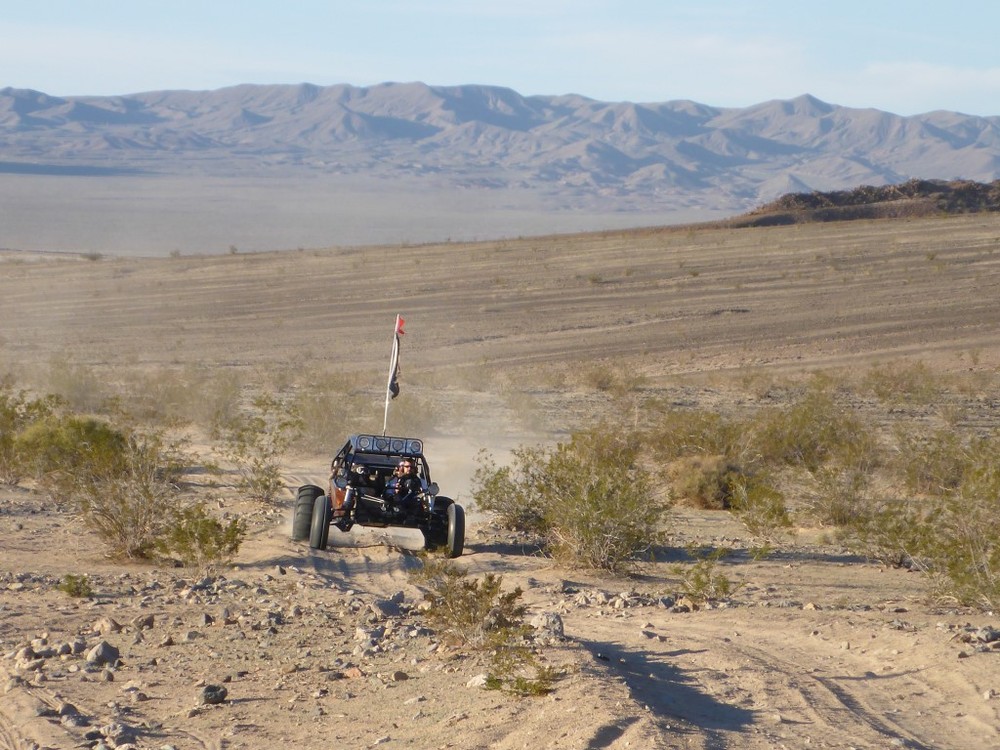 The mines are in an area designated by BLM as "Area of Critical Environmental Concern" to help protect it's historical value, therefore you'll have to take a short hike from the parking area. The trail is well-maintained and clearly marked, therefore it's easy for all age groups.  After you walk through the trail head entrance, it's less than a 1/4 mile to the mines and mills. 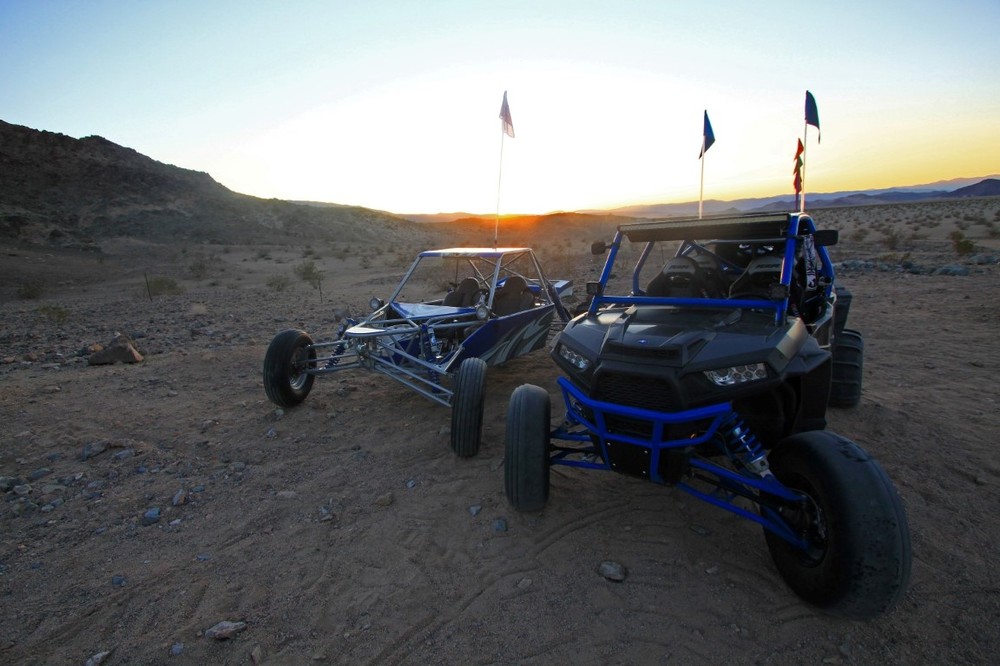 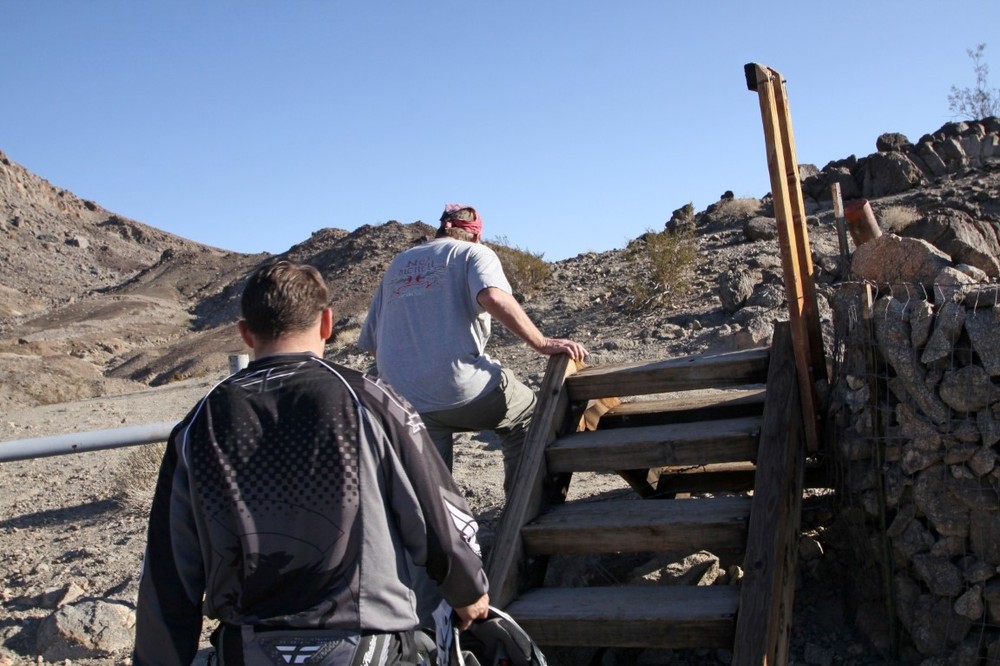 After walking up the hill, you'll notice a big stamp mill. These stamp mills, built in the 1880's, were used to extract precious metals such as gold or silver from ore. The stamps were heavy metal weights that were lifted and dropped on the ore by a crankshaft. 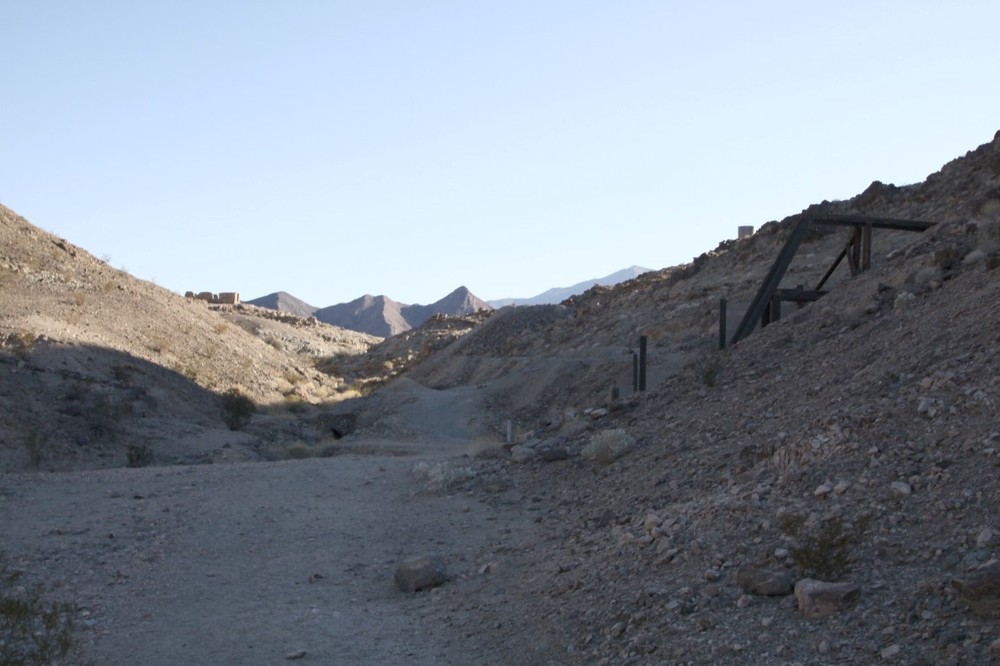 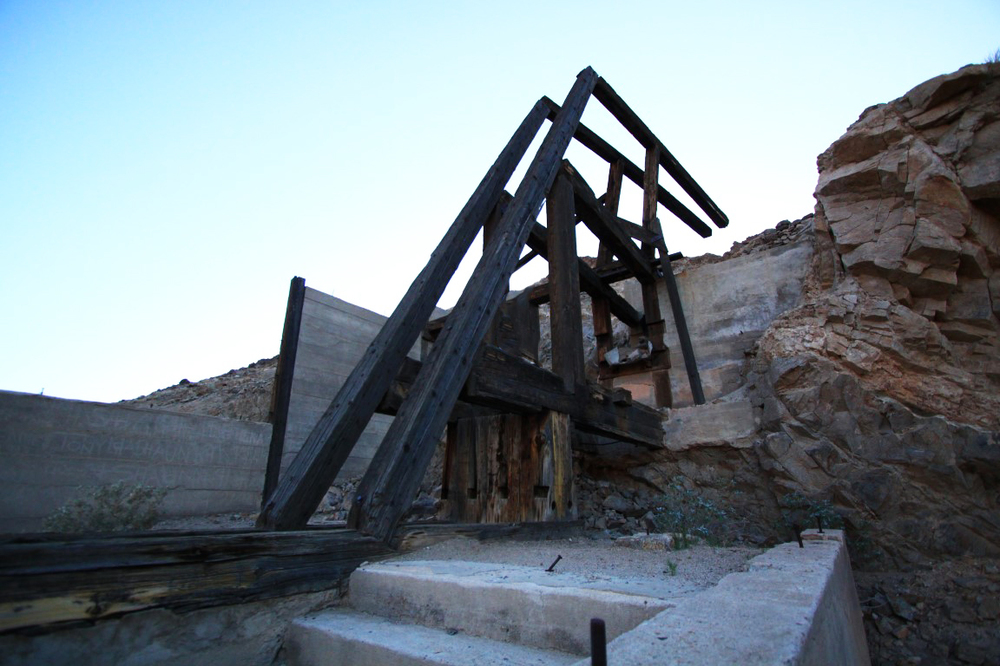 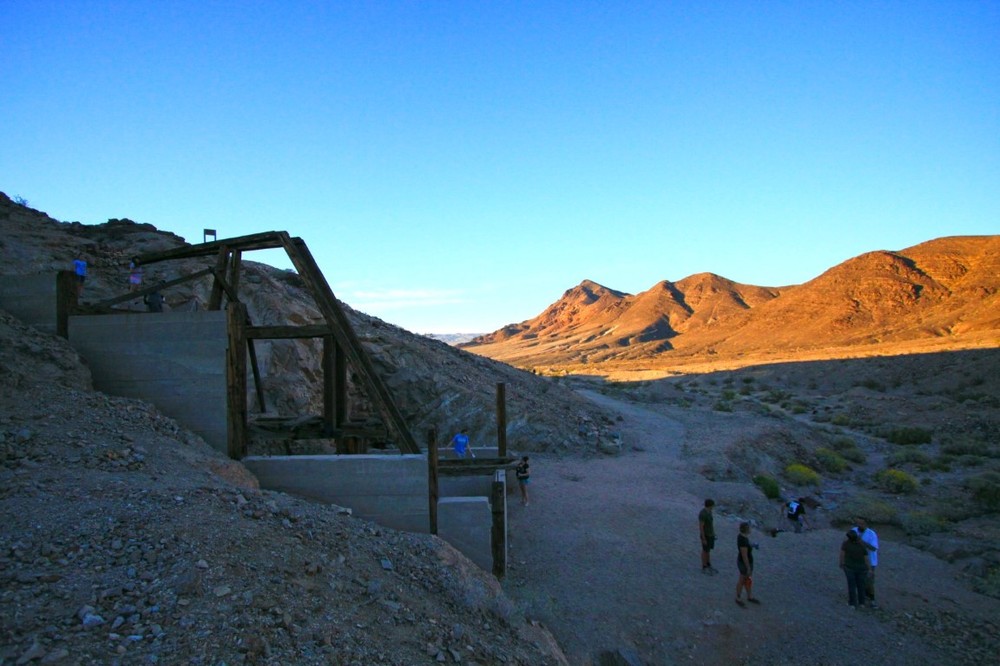 A little further down the trail you'll come up on multiple mineshafts in the side of the mountain. They are closed off with metal grates to protect people from falling in. 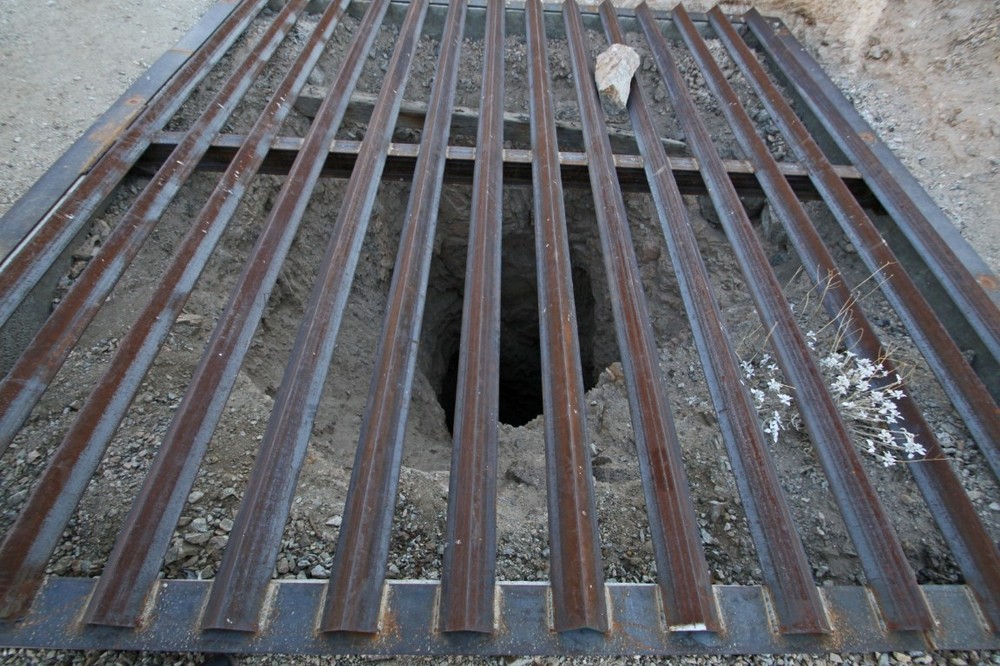 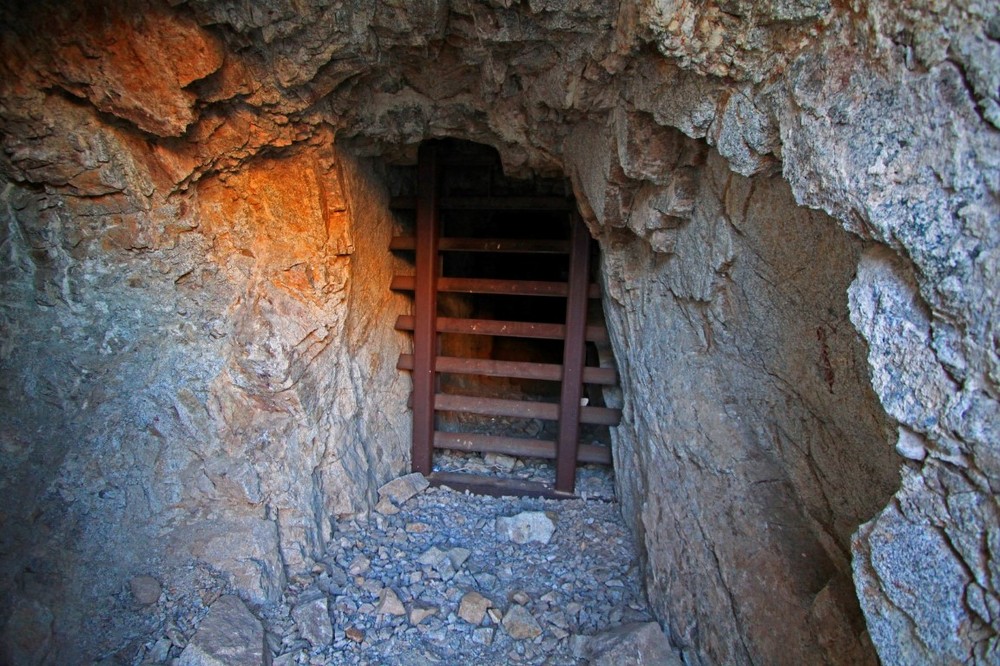 Although they are closed off, you can still go exploring into some further than others. 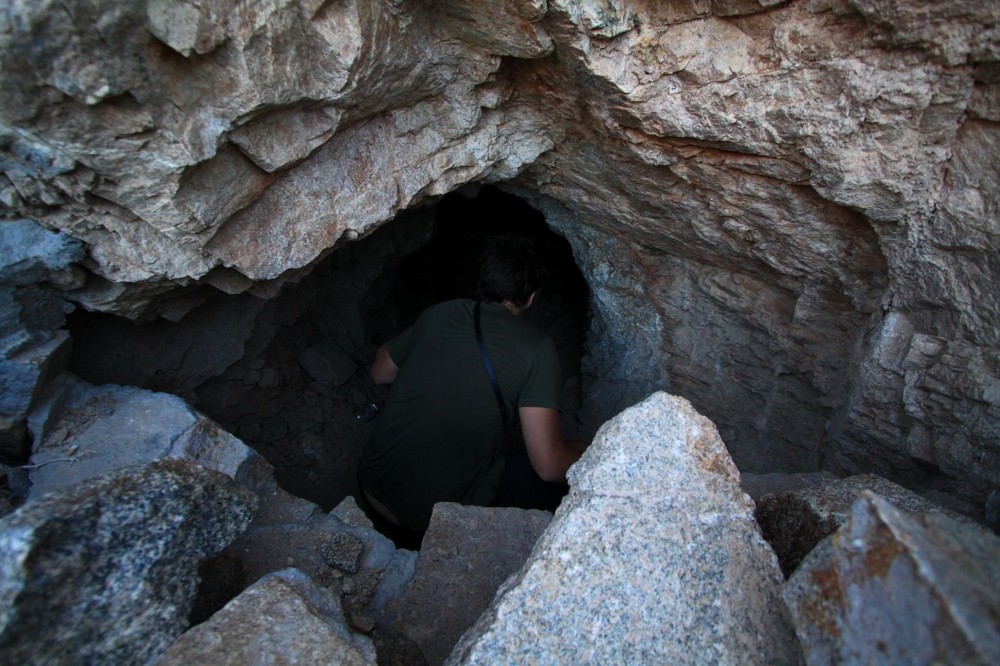 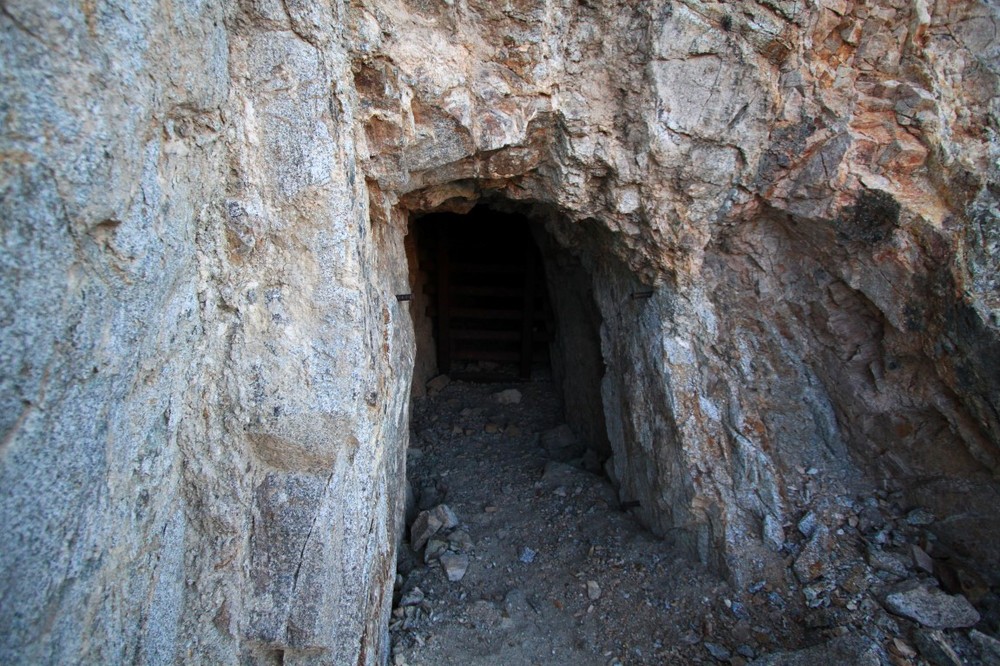 After checking out the mines, don't turn back quite yet. The best is part is just ahead. If you look up on the hill to the south, you'll notice an old stone building. You can follow the upper trail along the mountainside or you can go down to the left through the wash to get there.

If you take the wash route, you'll be able to see many pieces of old mining artifacts and equipment. 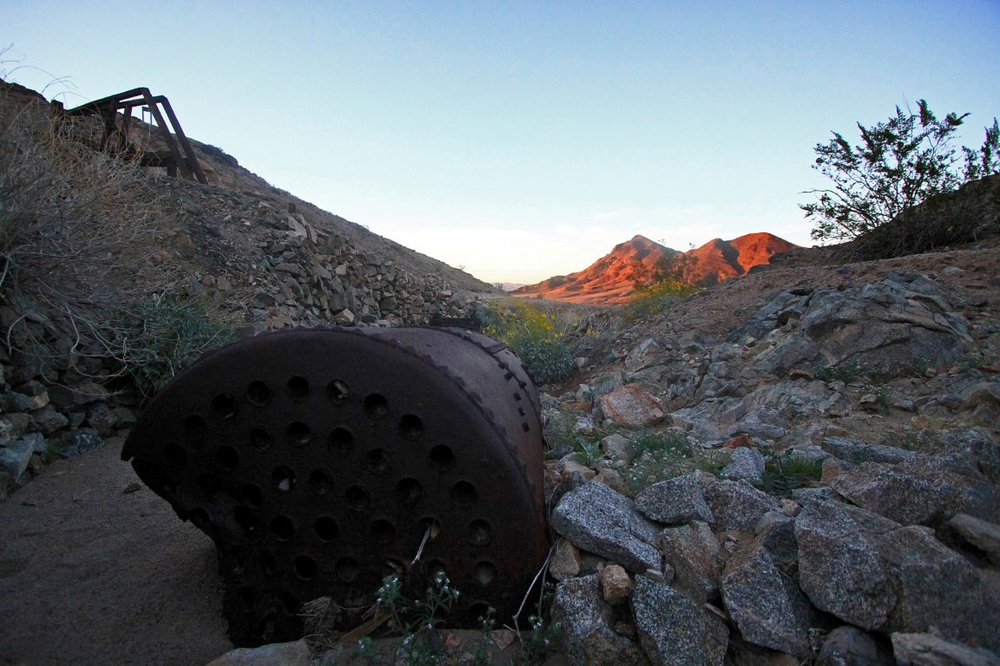 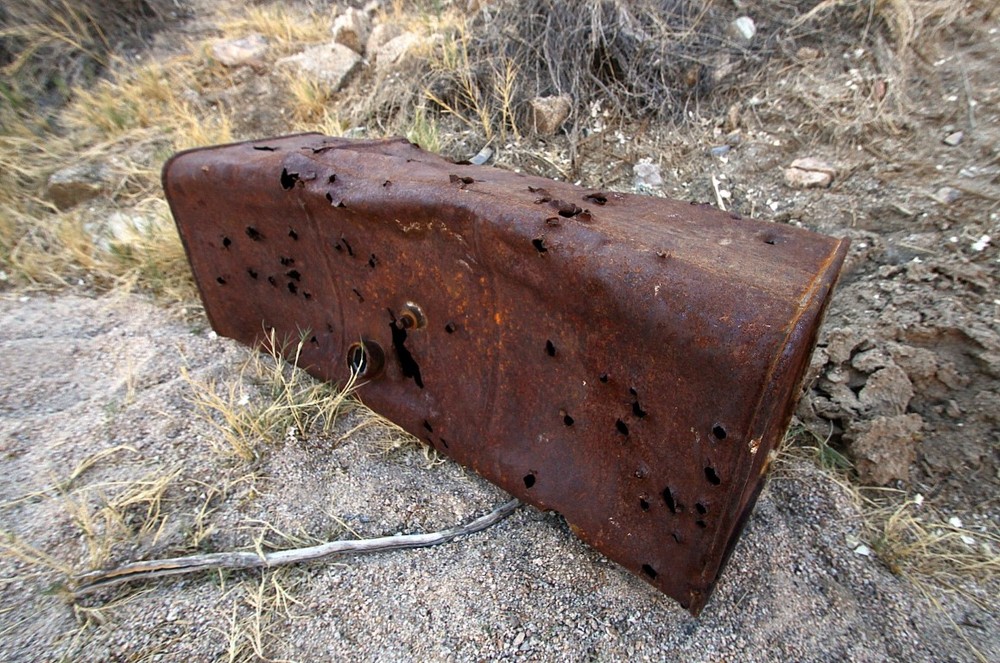 Up on the hill you'll find the oldest standing structure in San Bernardino County, the Amargosa House. Built back in the 1850's out of rock and concrete, it's walls still stand today and cast shadows in the Salt Creek Hills. Stand in the middle of the structure and let your imagination paint a picture of how life was back then. 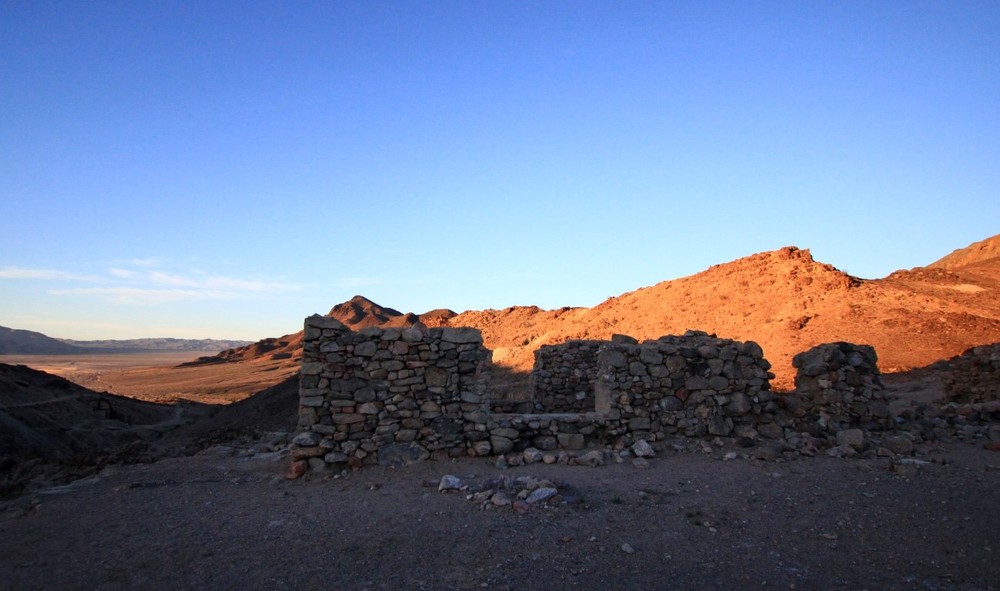 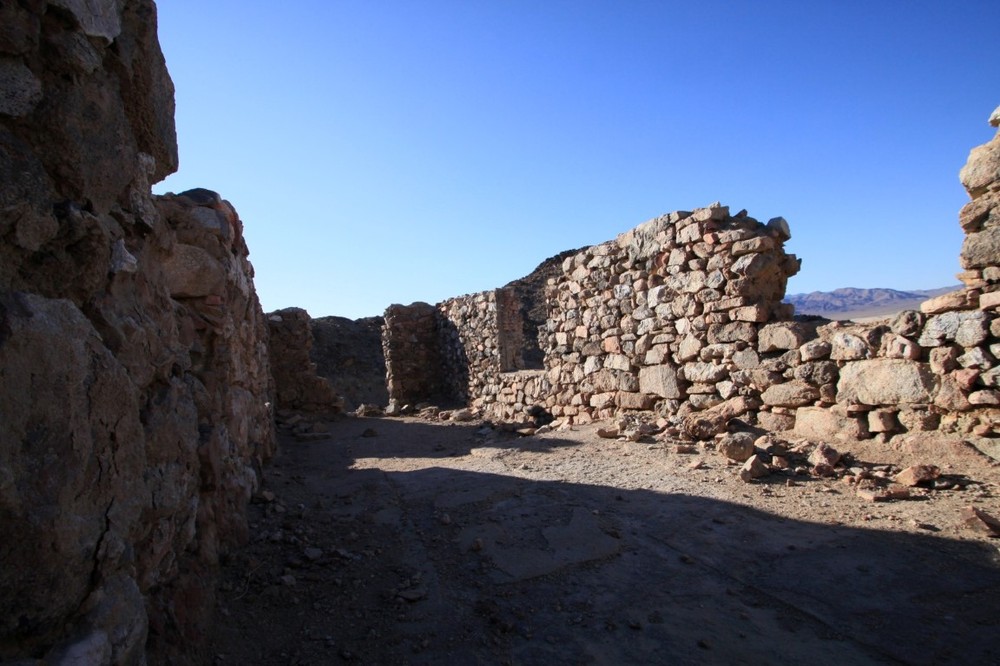 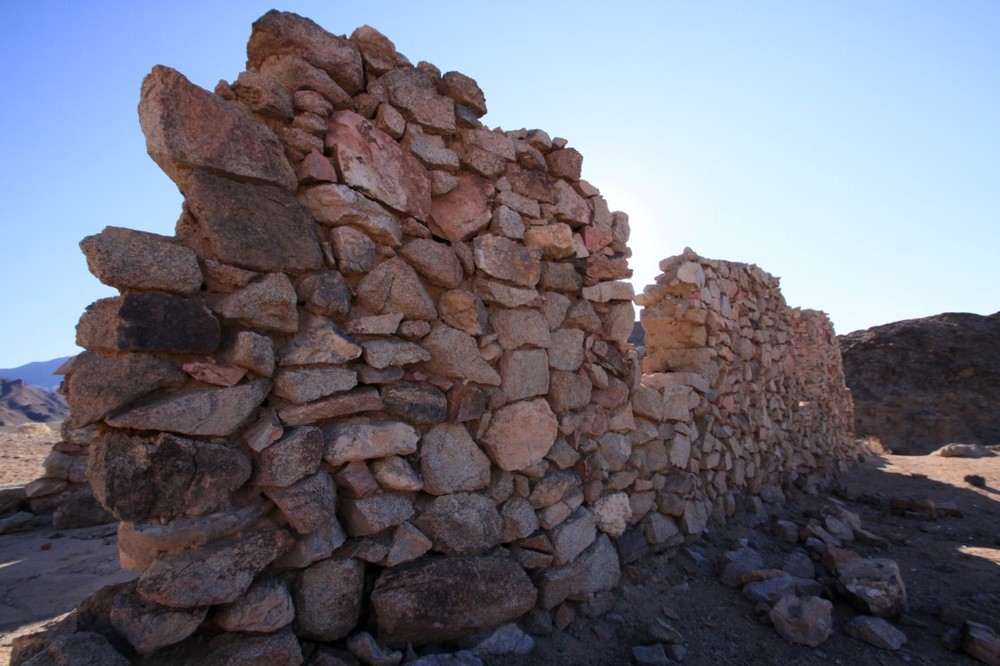 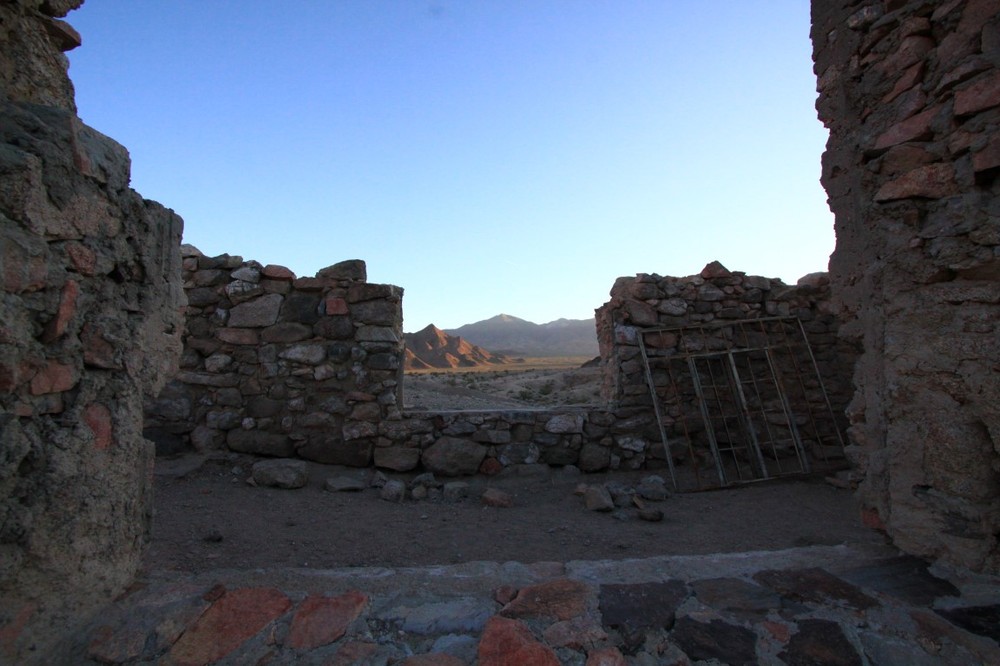 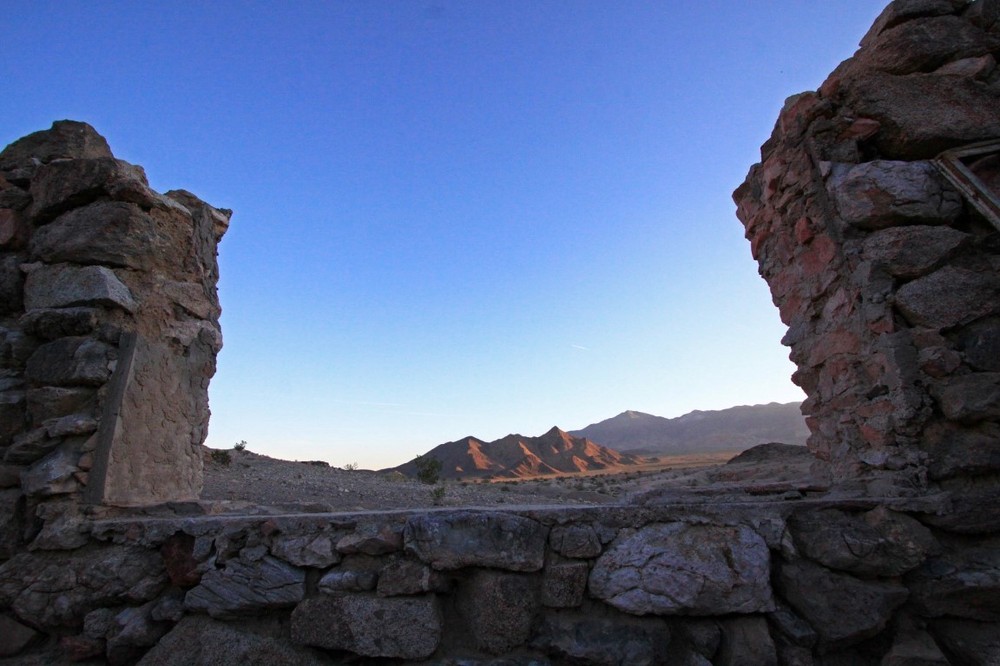 Download the above map as a GPX file and plug it into your GPS device.